Get ready.....the Official Oktoberfest will return this year, 2022, to the festival grounds in Munich!  After a two year pause, the fest of 2022 will sure to be one to remember.  Munich's Oktoberfest will run September 17th - October 3rd, 2022. Prosit!

A classic 0.5 liter, 1 liter, or 2 liter Oktoberfest glass beer mug is the best way to enjoy a tasty Bavarian märzen beer right out of the barrel. Or you can go for a more pointed option with an artisanal German stein. We also carry a variety of stoneware mug’s and steins to keep your suds cold, as well as a wide selection of different beer boots to challenge even the most experienced beer drinker.

We carry an assortment of top brands from the official Oktoberfest 2021 steins, Paulaner stoneware mugs, Hofbrauhaus dimpled glass mugs, to Hacker-Pschorr steins, Becks, Lowenbrau, and more! If you want to make it a more personal affair, check out our custom beer steins & mugs to send everyone home with the perfect Oktoberfest souvenir.

While good beer is a standard measurement of success for any Oktoberfest celebration, a host can’t afford to skimp on the atmosphere. GermanSteins.com has an endless selection of Bavarian flags and Oktoberfest banners, table clothes, posters, lighting, and other amenities to bring your own Thereseinwiese to life wherever you are.

Dress the part and sport a pair of lederhosen and an authentic German mountain hat like a real Bavarian. We also offer themed aprons for those roasting the chickens or baking the strudel, along with a score of Oktoberfest t-shirts, hoodies, hats, and jackets.

Celebrate this centuries old tradition the way it's meant to be. 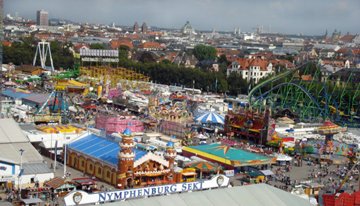 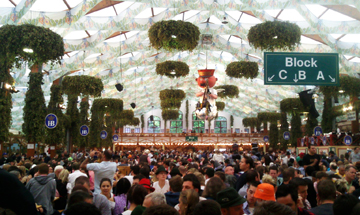