Germany is famous for its castles, many of which can be found in idyllic settings. Castles were first constructed in medieval times most often to serve as fortified buildings for people to not only live in, but to effectively defend themselves against invaders. Our medieval and castle motif beer stein selection include some of the most well-known fortresses in Germany, as well as scenes featuring knights, dragons and more.

Over 600 castles can be found in Bavaria, with Neuschwanstein the most famous of them. There are several other notable Bavarian castles. A few of them are Linderhoff, Nuremberg, Nymphenburg and Burghausen.
When King Ludwig II assumed the Bavarian throne in 1864, he inherited Königshäuschen, a royal hunting lodge in southwestern Bavaria. After initially enlarging the building, in 1874, he tore it down and relocated that section. The remaining structure was then added on to, creating a new palace, Schloss Linderhoff. Although Linderhoff is the smallest of Ludwig's castles, it is probably his most luxurious.  The building's style and décor were inspired by the opulent French Palace of Versailles. The castle is also where Ludwig’s well-known Venus Grotto, an artificial stalactite cave, is located.
The Imperial Castle of Nuremberg was one of the most important imperial palaces during the Middle Ages. The castle is located north of the city of Nuremberg, the unofficial capital of the Holy Roman Empire.  Between 1050 and 1571, all emperors spent at least some time in residence at the castle. It was the place where each newly elected German emperor held his first Imperial Diet (assembly), and where the crown jewels of the empire were kept.
One of the most famous sights in Munich is Nymphenburg Castle, a Baroque palace commissioned by Elector Ferdinand Maria and his consort, Henriette Adelaide of Savoy, to celebrate the birth of their son and heir. Construction began in 1664 and was completed in 1675. Located about 15 minutes from the city center, the palace was the main summer residence of the House of Wittelsbach, a Bavarian royal family and German dynasty.
Located in upper Bavaria, Burghausen Castle is the longest castle complex in Europe, measuring 1,043 meters, or approximately 0.64 miles long. The castle, which was founded before 1025, was transferred to the Wittelsbachs after the death of the last Count of Burghausen in 1168. It a massive stronghold, considered to be the country’s most effective medieval fortress.

Built on a breathtaking mountaintop site above the village of Hohenschwangau in southeast Bavaria, Neuschwanstein Castle is a dramatic 19th century fortress. Construction of Neuschwanstein, or “New Swan Stone Castle,” began in 1869. The castle, which was commissioned by King Ludwig II, was designed as the romantic ideal of a medieval knight’s castle. While its exterior is reminiscent of medieval times, the palace was equipped with many innovative—and in some cases, revolutionary—conveniences for the 19th century, including running water on all floors and toilets equipped with automatic flushing. A warm air heating structure was also constructed, as well as a hot water system. Ludwig intended the castle to be his personal refuge when he chose to withdraw from public life. He moved in to the still unfinished castle in 1884, 15 years after construction began. At the time of his death in 1886, it was still far from finished, with only 14 interior rooms completed. Had it been completed, the palace would have had more than 200 interior rooms. Shortly after the king’s death, the castle was opened to paying visitors. Its beautiful craftsmanship and richness of detail have made it one of the most popular tourist destinations in Europe, with approximately 1.4 million visitors annually. It has also served as the inspiration for Sleeping Beauty’s castle at Disneyland park locations around the world. 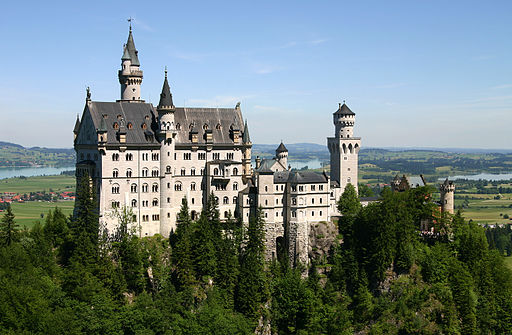 More pictures of Neuschwanstein.    Learn about the the "fairy-tail king" at the official website.

In April 1829, Crown Prince Maximilian (later King Maximilian II) of Bavaria was exploring the village of Schwangau in the German Alps when he came across the ruins of a fortress. Constructed by a family of knights in the 12th century, the castle had once been impressive. The knights owned the castle until the family died out in the 16th century. It then changed hands several times, eventually falling to ruin. Maximilian was fascinated by the ruins and found the surrounding area with its mountains and alpine lakes to be stunningly beautiful. He decided to acquire the ruins and restore the castle to its former greatness. In February 1833, construction of Hohenschwangau Castle began, continuing until 1837, with additions in 1855. The castle was rebuilt according to the original plans. It became the official summer and hunting residence of King Maximilian and his family. Over 90 beautifully painted frescoes can be found throughout the castle, depicting everything from German fairy tales, sagas, medieval legends and poetry to portrayals of the family and their ancestors. The king’s bedroom, the “Tasso” room, has an extraordinary starry sky with illuminated stars and moon integrated into the ceiling. The “Berchta” room—the writing room of Maximilian’s wife, Queen Mary—has murals that tell the Bavarian version of the birth of the medieval emperor Charlemagne. In 1864, King Maximilian died, and his son, Ludwig, succeeded to the throne. After his father died, Ludwig moved into the castle, where he oversaw the construction of his own nearby castle, Neuschwanstein. Today Hohenschwangau Castle remains as it was constructed in the 19th century and has become a popular tourist destination, with over 300,000 people visiting annually.

See more pictures of castle Hohenschwangau at the official website.

Host a Royal Celebration of the Holidays with Christmas Beer Steins

Bring a piece of authentic Germany into your holiday celebrations with our selection of Christmas beer steins. Each of our steins are imported directly from Germany and feature pewter lids and handmade motifs of Santa Claus and other Christmas themes. These make fantastic gifts for all lovers of beer!

Shop for a whole assortment of German beer steins available online on our storefront.