This magnificent solid crystal beer stein has hand-cut diamond pattern facets and a pewter German eagle medallion with a banner reading "Deutschland" on the front. This stein is a collectible of superior quality and true elegance crafted by top artisans with traditional German tools. The crystal is hand-blown into a wooden mold by the artisan workmen and the finely designed pewter figurine is hand-cast. The base features a cut star pattern and the lid has a 3.5" tall solid pewter St. George slaying the dragon on horseback. Comes with a card stating the stein's authenticity and information on it's craftsmanship.

The Legend of St. George

According to crusader legend, a Dragon made his nest near a city in Libya guarding their essential spring. To appease the dragon and gain access to their water supply the people of the city drew lots each day to choose a human sacrifice. Eventually the princess was drawn in the lot and her father, the king begged for her life to no avail. As luck would have it, St. George happened to pass by this town the same day and heard of the tragic situation. He swiftly rode to the dragon's nest and moved the princess out of harm's way. After making the sign of the cross, he distracted the dragon with his lance and wounded it with his sword. He then bound the dragon and took it to the city center. There in the presence of the towns people he shouted "Behold the power of God!" and slayed the dragon. In doing so the town was so moved by his actions, they converted to Christianity.

First told in the 5th Century A.D. this legend used the dragon to symbolize Paganism being slayed by the victorious sword of Christianity, or good triumphing over evil. St. George became a symbol for courage, devotion, piety, leadership, truthfulness and dedication among the Crusaders.

Crystal body made in the Czech Republic

Decoration & lid made in Germany by King-Werk 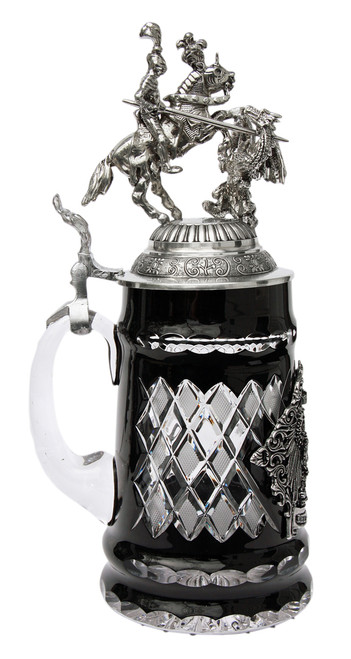