The front features "Franz Xaver Krenkl" (1780-1860), a well known horse dealer of the popular Oktoberfest races.  At this time, horse racing was the main attraction at the Oktoberfest festivities.  He is best known, however, for coining the Bavarian phrase "Wer ko, der ko!" (in English "Who can, who can!" or "Who can, can!").  Franz shouted this when he dared to overtake the carriage of the Crown prince Ludwig (who became King Ludwig the First) in the English Garden. This scene unfolds on the left and right sides of the stein.  The prince exclaims "Er Wagt Es!?!" (He dares it!?!) on the left panel while Krenkl waives his top hat as he dashes away turning to exclaim "Majestät, wer ko der ko!".

The sides also feature the logos of all the beer tents at the 2015 Oktoberfest depicted in a border of grape leaves.   The antique finish pewter lid is embossed with Wiesnwirt and innkeeper "Richard Süssmeier", who appears dressed as Napoleon to pay tribute to his nick-name "Wirte-Napoleon".

These steins are normally only available at the Munich Oktoberfest, however we were able to acquire a limited supply of these steins from the manufacturer.

Each stein has a copy of the artist's signature on the bottom, has a hand painted limited edition number and comes in a gift box.

Comes with certificate of authenticity. 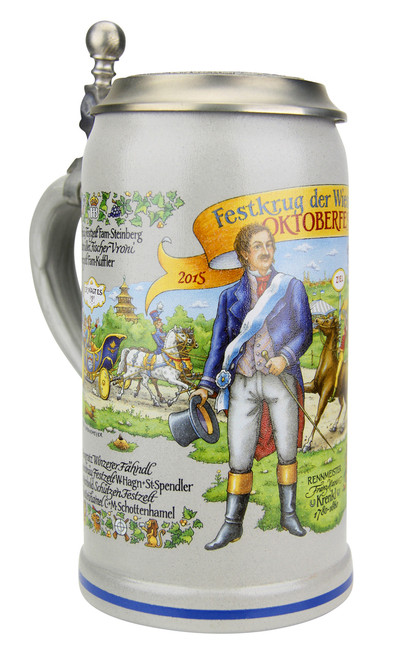