This stunning ceramic beer stein celebrates the 500 year anniversary (1516 - 2016) of the German purity law or Reinheitsgebot, which states only barley, hops and water can be used in beer.

The front reads "Wir wollen auch, dass in unseren Städten, Märkten und auf dem Lande zu keinem Bier etwas anderes als Gerste, hopfen und Wasser genommen und gebraucht werden soll."  which translates as: "We also want that in our cities, markets and suburbs nothing else shall be added to or used for beer than Barley, Hops and Water."

History of the Reinheitsgebot

2016 Marks the 500 year anniversary of the German Reinheitsgebot, better known as the German Purity Law of 1516. This law, enacted in order to eliminate the competition between businesses for the outrageously priced varieties of available grains, states that beers can only be made out of hops, grain, and water (the presence of yeast was not yet known at that point in time).

To this day, in order to legally be called a German “beer” this law is still on the books. However, Germany and Bavaria specifically are known worldwide for their superior beers that have the ideal amount of flavor, carbonation, and prefect frothy head that does not even disappear after you pour it!

A Stein Perfect for Any Collection 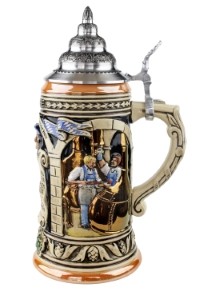 Add this beautiful collectible ceramic beer stein to your collection.

Some stein collectors have an impressive assortment that functions as a center piece. It consists of steins that they have collected from all over the world, and there is a very good chance that even making a quick glance at their “top row” steins will get you quickly escorted off of the premises. Touching is strictly out of the question.

Other collectors try to keep things a lot more modest with just a few steins. This rather economically priced 500 Year Anniversary Full-Color stein is perfect for ANY collection. Beginners and stein enthusiasts alike all agree that the artwork, craftsmanship, and overall attention to detail given to this piece place it in the upper echelon of high quality German drinking apparatuses. Did we mention that it comes complete with a decorative pewter lid? The front has a painted inscription that reads:

Which translates in the King’s English to:

“We also want that in our cities, markets, and suburbs nothing else shall be added to or used for beer than barley, hops, and water.”

You’ll be the life of the party, with all of your guests wondering what your mug says. You can take said opportunity to act and feel extremely smart by filling them in on a brief history of the German Purity Law of 1516.

Pair this commemorative beer stein with a matching T-Shirt and you'll be the proud German you've always wanted to be.

Not only will this beer serve as a decoration, it actually can be used for its intended functionality as well. It measures about 12” tall, 4.7” wide at its base, and can hold an entire liter (35 ounces or nearly 3 standard canned beers) of whatever you beverage of choice may be. On another note, it may be wise to walk, take public transportation, or establish a designated driver in advance. After all, what is really more German than public transportation?

Shop all Reinheitsgebot collectible merchandise available for sale from Germansteins.com.

Limited Edition of ONLY 500 Pieces Worldwide! 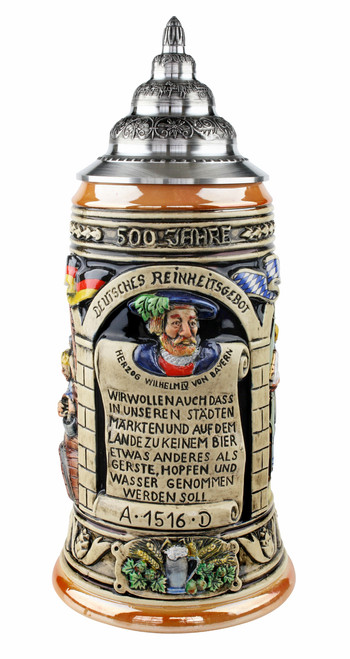