This beautifully detailed large advent calendar depicts a snowy scene of the market in Trier at Christmas.  Pictured also are, the Petrusbrunnen, the church of St. Gangolf, the Steipe and the Marktkreuz.  Trier was founded more than 2000 years ago, making it the oldest city in Germany. The city, which has already been acknowledged by the Romans, was declared a World Cultural Heritage by UNESCO in 1986 with its Roman architectural monuments such as the Porta Nigra, the Trier Cathedral, the Barbara- und Kaiserthermen, the Amphitheater, the Roman Bridge, the Constantinopleil and the Igeler Pillar.

The detailed picture has 24 little doors to open. Each door has a little picture behind it. The tradition is to open one door each day from December 1 thru December 24. Children love to open a door a day as they count down to Christmas. 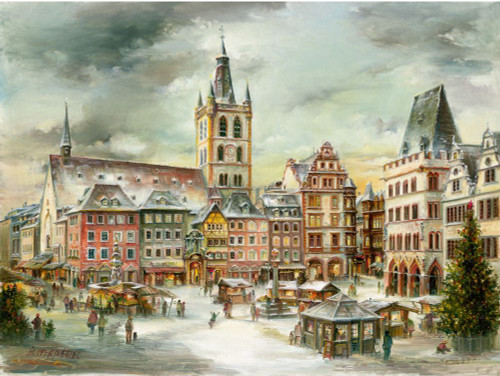