This German advent calendar Christmas card shows a snowman holding a candle amidst an enchanted scene of dwarfs making mischief in the forest.  A fox & fairy laugh at the joke they just played - at an overturned sled, the Christmas goodies strewn about.  A crow grabs a doughnut while another dwarf plays a tuba.  This scene is from Fritz Baumgarten's "Weihnachtswelt" (Christmas world) series of drawings.

Fritz Baumgarten, a prolific illustrator of German children's books, originally drew this charming scene.
His work first appeared on Advent Calendars in the 1950's and he has become one of the classics.

The detailed picture has 24 little doors to open. Each door has a little picture behind it. The tradition is to open one door each day from December 1 thru December 24. Children love to open a door a day as they count down to Christmas.

Does Not come with candy or chocolate. Glitter Accents. 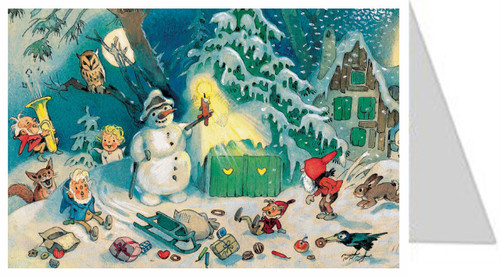