This beer stein celebrates the German tradition of Oktoberfest and it's festive music. A German Oompah band is shown on the front panel in traditional dress while vigorously playing their instruments. Hand painted with a deep cobalt blue background. Banners read: "Munchen Oktoberfest" held by two Bavarian lions with gold crowns and "Prosit". The sides feature Munich's Frauenkirche (Our Lady's Church) with it's unmistakable onion domed towers, the Rathaus with the most famous Glockenspiel (animated bell-tower) in the world, trumpets, a pretzel, a beer mug and laurels encircling the scenes. Oktoberfest beer wagon and edelweiss pewter relief conical lid.

The Munich Oktoberfest was founded in year 1810 to celebrate the wedding of Crown Prince Ludwig I of Bavaria with Princess Therese. It has grown to become one of the largest festivals in the world drawing six million visitors and has inspired many more such fests around the Globe. 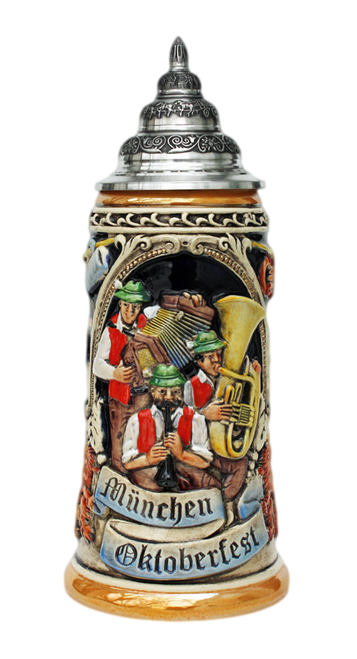