This hand painted medieval Holy Roman Empire beer stein features five panels with German Emperor (Kaiser) Charles V, his son, brother and knights.  The front panel shows Charles V and his coat of arms.  The year 1556 on the front is the date in which he stepped down from his throne and divided his kingdom between his son Philipp II and his brother Ferdinand I (shown on the left and right panel flanking the handle).  Charles's empire included nearly all of central Europe (Germany, Netherlands, Spain and Italy) and his goal was to spread Christianity in a unified state under his reign.  The unique base rim features lions and crowns in high relief.

The beer steins are reproduced according to still existing records and using the original patterns of the models created by Peter Duemler (1860-1907), one of the best-known artists of his time, more than a century ago. Each beer stein of this series is exclusive and is manufactured only in a limited number, a rare piece for lovers of historic drinking vessels and collectors all over the world. 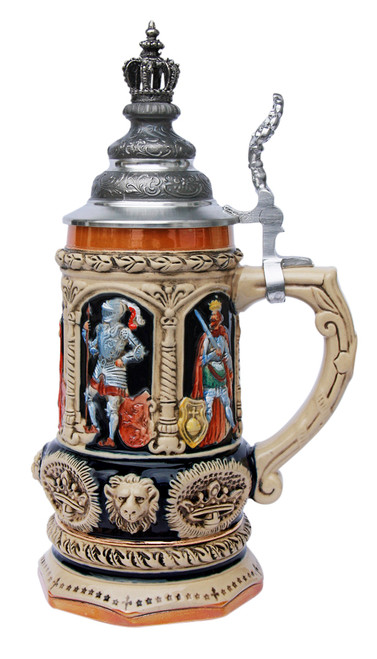