The beautifully detailed German advent calendar honors Adrian Ludwig Richter was a painter, draftsman and woodcutter during the Romantic and Biedermeier periods. His folk drawings and woodcuts still illustrate many German storybooks today. Ludwig Richter was also teacher at the Meissen porcelain factory drawing school for many years. He later returned to his native city of Dresden and was a professor at the Dresden Art Academy.

The banner at the top of this Christmas calendar reads "Ehre den Gott in der Höhe, Friede auf Erde" which translates as "Glory to the God on high, Peace on earth".  The scene on this calendar was influenced by the city of Meissen with it's picturesque roofs, gables and towers.  A gathering of minstrels, artists and children sing hymns from the high tower filling the courtyard below with sounds of Christmas.  Beer stein shaped lanterns cast a glow on their faces.

Each of the 24 doors reveal a romantic woodcut.

The detailed picture has 24 little doors to open. Each door has a little picture behind it. The tradition is to open one door each day from December 1 thru December 24. Children love to open a door a day as they count down to Christmas.
Does Not come with candy or chocolate and does NOT have glitter accents 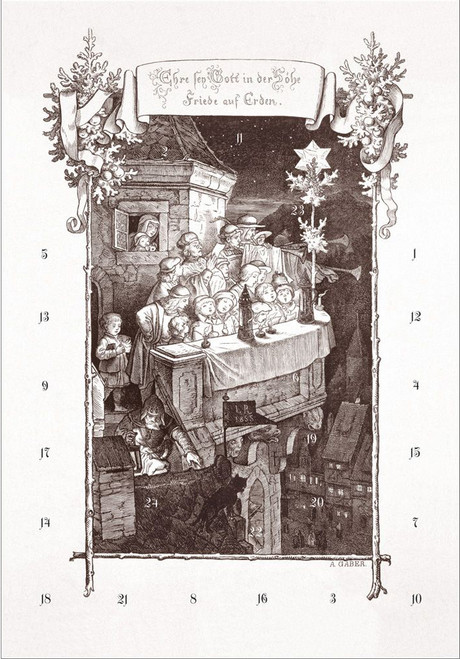