This beer stein has been crafted to chronicle the history and progression of the German paratroopers.  The body of the stein is a smooth, black glazed, high quality stoneware decorated with a platinum wrap around design.  Along the top border are the words, "Die Historie Der Deutschen Fallschirmtruppe," translated as, "The History of the German Paratroopers".

The left side of the platinum design features a variety of images depicting paratroopers and planes including jumping out of the plane, free falling and parachuting towards their goal.  It also displays a timeline that details the history and accomplishments of the German paratroopers from 1916 to 1943.  All labels and timeline entries are listed in German.

A pewter replica of a German paratrooper emblem with the word, "Fallschirmjäger" underneath it appears at the center of the wrap around decoration opposite the handle of the stein. The right side of the platinum design features more pictures of planes and paratroopers in flight along with the continuation of the timeline from the left of the stein picking up from 1943 and concluding in 2001.  All labels and timeline entries are in German.

A detailed pewter figurine of one of the drop planes used by the paratroopers is fixed on top of the ornamental pewter lid.

All of the major components of the stein, the body, lid, and pewter decoration, were crafted by skilled artisans in Germany.  This version of the German Paratrooper Stein is produced in a registered and individually numbered series of 5,000 pieces.

Height: approx. 9" to top of thumblift 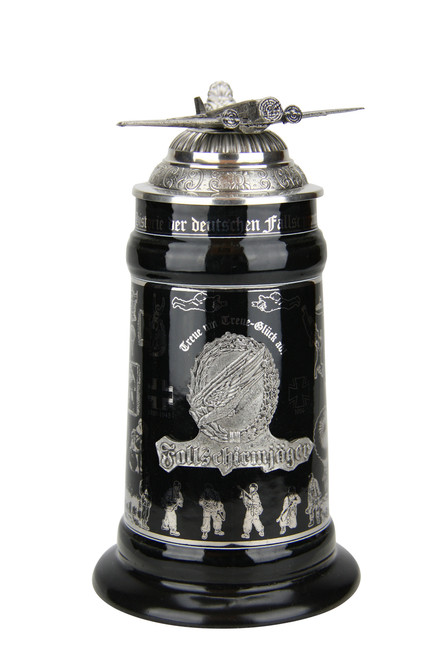