This German made 2 liter ceramic beer boot was originally modeled in the 1920s when the tradition of drinking out of a boot became known (see history below).  One side depicts a soldier with helmet in hand and the text "TAPFER." "Froh beim Bier." which translates as: "BRAVE." "Happy with beer."  The reverse side shows a wise man with scroll and walking stick pointed at a skull as if to say "leave me alone death".  The text reads: "WEISE." "Das loben wir." which translates as: "WISE." "That’s what we like."

The front and back have relief coat of arms/crests featuring a lion and knight that read: "(front)Sei Meister auch im Trinken. Laß Meister den Trunk nicht sein, (back) Wen(n) andere zu Boden sinken. Trink aus und geh dann heim." which translates as: "(front) Be a master in drinking also. Don’t let the drink master you! (back) When others fall to the ground. Empty it and walk home."

The cream & brown rustic background accents this beautifully hand painted and impressive stoneware boot.  Columns and arches define the four scenes around the body of the boot with flowers, oak leaves, acorns and a 3D ceramic spur on the heel.  Stylized shoe laces are depicted on the toe.

Tradition tells that the boot came into use during WWI.  At that time, German soldiers, lacking a better drinking vessel, used their own leather boots (patched to hold liquid) for having what was possibly their last beer.  The boots were then filled to the top with beer and passed among the regiment soldiers with best wishes for a safe return from battle.  American soldiers were introduced to this tradition of drinking from a boot while stationed in Germany after WWII.

Made in Germany by King-Werk 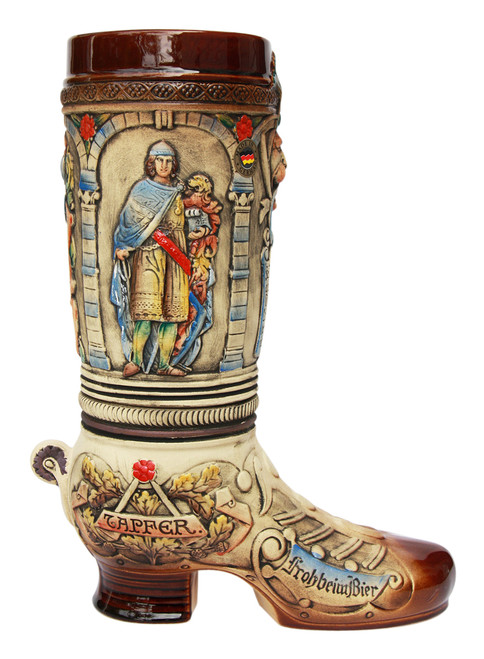