The Reinheitsgebot, also known as the German Beer Purity Law or Bavarian Purity Law, was made into law in Germany in 1516 as way to regulate the production of beer. It stated that German beer could only contain three ingredients: barley, hops and water. At the time, the existence of yeast had not been discovered.

The law gave the government the right to regulate the ingredients, processes and quality of beer sold to the public. Originally, it ensured that the demand for crops such as wheat—used to make inexpensive bread—did not become scarce or increase in price. Limiting the ingredients also made it safer to drink. At the time the law was introduced, people drank large quantities of beer because water supplies were often polluted. The law kept cheap and unhealthy ingredients out, ensuring the beer remained “pure” for consumers. Previously, brewers had tried everything from roots, fruits, herbs and weeds to poisonous seeds, mushrooms and animal products. Some were used as a substitute for hops and others to increase the intoxicating effect or the shelf life.

The Reinheitsgebot is no longer part of German law. It was replaced in 1993 with the Provisional German Beer Law, which allows for some additional ingredients. However, many German brewers claim to still abide by the original law. 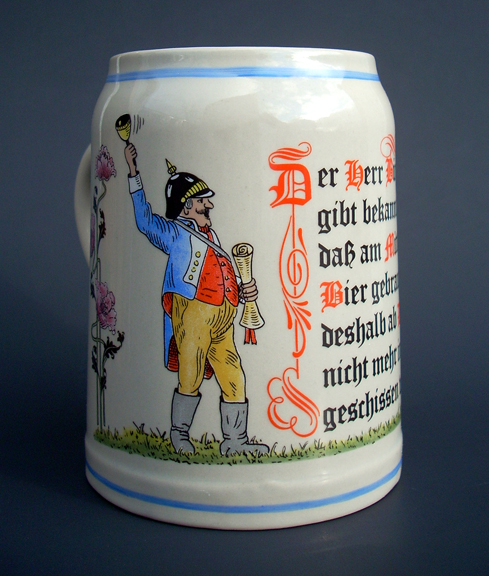 German Purity Law Beer Mug with an amusing take on the original law.