This German advent calendar depicts an enchanted scene of a Christmas parade lead by dwarfs through the forest.  A carriage loaded with presents is pulled by two mice with a ladybug and beetle carrying banners.  The merry band winds past a small tree village and through the snow-covered winter forest.  The bright glow of their lanterns and sounds of their celebration bring animals out of the forest out to see the joyful scene.  Three angels are shown on clouds in the top left joining in with their heavenly song.

Fritz Baumgarten, a prolific illustrator of German children's books, originally drew this charming scene.
His work first appeared on Advent Calendars in the 1950's and he has become one of the classics.

The detailed picture has 24 little doors to open. Each door has a little picture behind it. The tradition is to open one door each day from December 1 thru December 24. Children love to open a door a day as they count down to Christmas.
Does Not come with candy or chocolate

This advent calendar has glitter accents and has a small hole punched at the top for hanging. 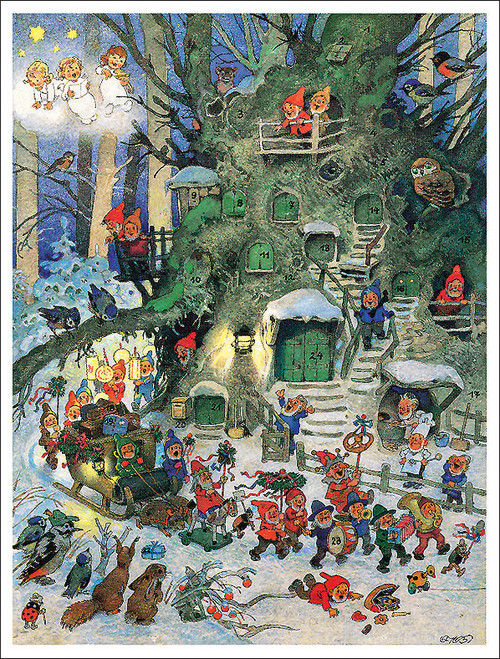