Stoneware, raised-relief decoration. Stoneware, raised-relief decoration. This horn celebrates the greatest of the Irish Myth-heroes, CuChulainn, whose larger-than-life exploits were recorded in the 12th Century Book of the Dun Cow. At the age of six, the boy Setanta killed a fierce watchdog belonging to Cullan the Smith with his bare hands, then offered himself as a replacement. Seeing this, the chieftain Conall christened him CuChulainn, The Hound of Culann. In his final battle, mortally wounded, he lashed himself to a pillar to remain upright & continue fighting. So feared was he that his enemy Lugaire dared approach his body only after a crow had settled on him. This explains the horn's motif: On both sides of the horn, in relief is CuChulainn on horseback with dog, hunting a stag in the woods. The branches & roots of the trees transform into an elaborate knotwork pattern. The mouth of the horn features a faithful dog with sword. The horn tip is a rapture's head. The Horn of CuChulainn was sculpted by Bob Maurus. A strap for carrying/hanging the horn is included.  This horn also features a resin cast antler stand, upon which the horn rests. 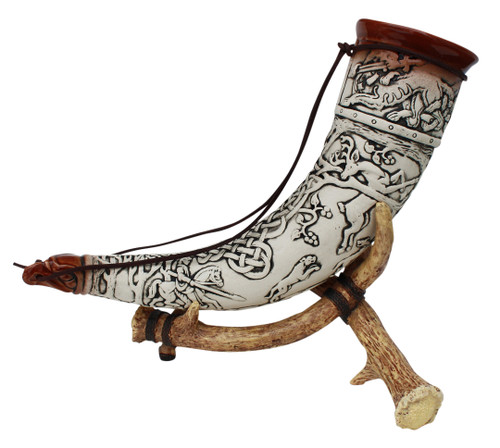