Berlin Wall beer stein with an actual piece of the Berlin wall on the lid.  The front of this hand painted relief decorated stein shows the Brandenburg Gate.  The Berlin coat of arms is pictured between the broken Berlin wall.  The text on the wall reads "Freiheit 9. Nov. 1989" (Freedom Nov. 9th, 1989) and "Mauer - The Wall" (die Mauer translates as the Wall).

The right side features a view of Checkpoint Charlie - the crossing point from East Berlin to West Berlin.  The left side depicts the Kaiser Wilhelm Memorial Church (Gedächtnis Kirche).  Originally built in the 1890's, the church suffered substantial damage from bombing in WWII.  The blue building to the right was constructed post war and now functions as the new church.  The original building serves as a memorial hall.

Height: 9.5" (depending on the size of the wall piece) 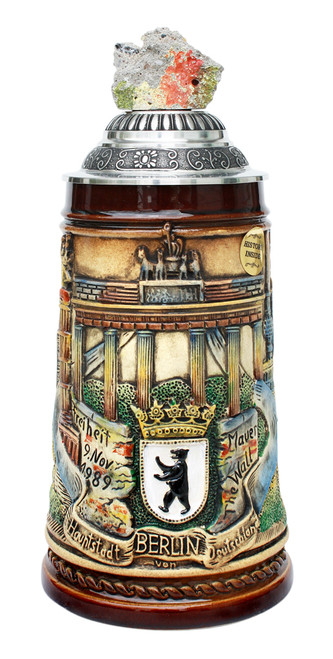