General von Steuben, who lent his expertise in training George Washington's troops for the revolutionary war is handsomely depicted on the front panel of this hand-painted patriotic stein with 22K gold accents. The sides picture the capitol building in high relief and the liberty bell opposite. An American and German flag fly near the lid of this stein, while the base details Baron von Steuben's date of birth & death.
The official red, white & blue disc emblem of the Steuben Society is depicted on this stein with express permission of the National Council of the Steuben Society of America. The pewter lid features crossed German and American flags with a three-dimensional eagle finial.
History of Baron von Steuben in German and English included. 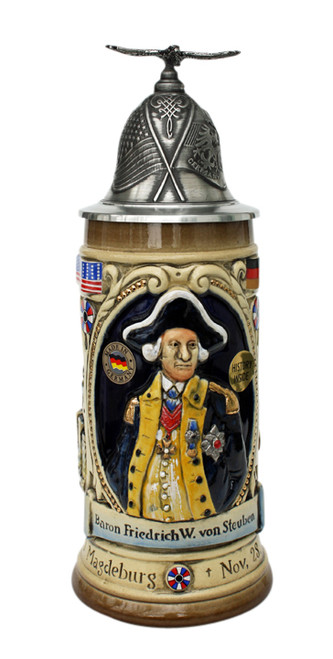