This hand-painted relief beer stein shows a panorama of notable scenes and landmarks from port cities of and near the Baltic Sea including Helsinki, St. Petersburg, Tallinn, Stockholm, Oslo, Gdansk and Kobenhavn (Copenhagen). A traditional viking ship is mirrored on one side by a cruise ship on the other, detailing the importance of this inland sea in both ancient and modern times.
The vikings and the Hanseatic League valued the Baltic sea as a means of efficient transportation to the important cities along this historical trade route. Modern day cruise ships sail from port to port giving their passengers a taste of the many cultures and cities of the Baltic Sea.
The upper rim is decorated with relief nautical motifs including an anchor, wave, ship, ship's wheel and seagull. The lower rim features the country flags of the cities shown above including Denmark, Norway, Russia, Finland, Sweden and Estonia. The front features a map of the Baltic sea and surrounding land masses and a waving banner accented with blue reading "Baltic Sea" with a Viking below. A deep cobalt blue background mimics the sea. Pewter conical lid. 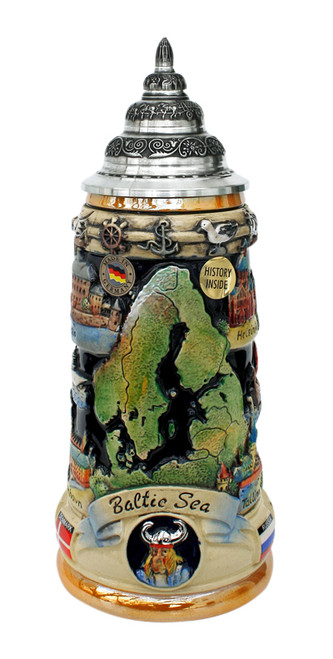