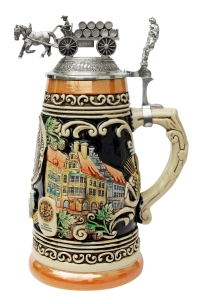 Show your German pride with this ceramic beer stein honoring the Hofbrauhaus brewery.

In 2016 the Hofbrauhaus Brewery can arguably be considered the most famous brewery worldwide. Despite being the largest tourist attraction in Southern Germany, the HB has opened up locations throughout the United States, and their logo is recognized almost instantly worldwide.

What better way to commemorate the 425 year anniversary of this beer-brewing giant than with this limited edition, hand painted ornamental stein that is perfect for any stein aficionado’s collection of beer drinkware.

Germansteins.com takes pride in the fact that we offer only the best quality decorative steins, beer glasses, and mugs. What sets this stein apart from some of our other products is the amount of detail you get for the relatively modest price tag that is attached.

It is not uncommon to find steins comparable to this both foreign and abroad for double or even close to triple the price! In addition with this particular product, you will receive a Hofbrauhaus certified 425 year certificate of authenticity that proves that this is one of the few products actually endorsed and produced directly for the HB Brewery.

The stein’s artwork depicts a scene of the Hofbrauhaus in Munich, Germany. The focal points of the mug are the two plaques honoring both Gruender des Münchner Hofbräuhauses (the founder of the Hofbrauhaus Brewery) and Wilhelm IV Herzog von Bayern (the creator of the German Purity Law of 1516).

You will notice that for added decoration and style, a beer maiden has been strategically placed holding two liter beer mugs that are overflowing with everyone’s favorite frothy, golden, nectar of the Gods.

If you are interested in the German Purity Law at all check out some of our other 500 year anniversary products.

This decorative stein is capable of holding a liter (head included) of your particular brew of choice. Measuring 10.5 inches tall with a decorative pewter lid, this stein is the real deal. A functional, but eloquent thumb lift not only makes this stein authentic, but also grants a functionality asset to those who choose to use the stein to actually drink from.

The beautiful glazed background gives off a shine that reinforces its stunning beauty. Only 425 of these are in existence and are made in Germany specifically for the Hofbrauhaus Brewery.

Comes with Hofbräuhaus Certificate of Authenticity.

Made in Germany by King-Werk for the Hofbräuhaus 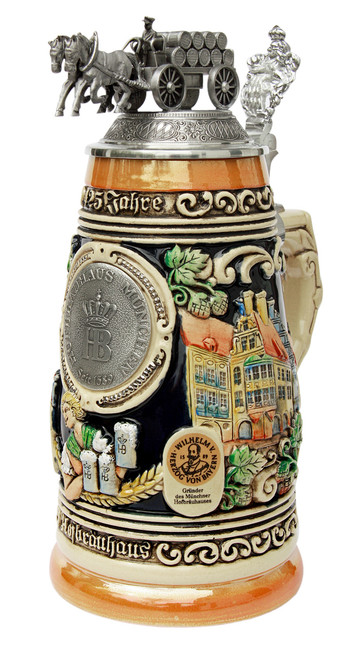