Embrace the hipster in your life and give them the gift of perfectly crafted glasses for each of their favorite craft beers. From porters and stouts to IPAs and pilsners, German Steins has a glass, mug or stein for any beer.

Any American beer is considered a craft beer if their annual production is six million barrels of beer or less. Six million may seem like a lot, but when compared to giant breweries like Budweiser and Busch, it is just a small fraction.

A Primer on Pairing Beer with Glasses

Beer and food pairings have been covered everywhere, but what about the pairing of beer with glasses? GermanSteins.com will get you up to speed on the basics.

Sure, it’s possible to glug down beer from a bottle, any old pint glass, or a red plastic cup. For anyone who knows anything about beer, though, this would be an abomination. The right glassware does more than just hold the beer until it can be consumed. It enhances the appearance, the aroma, and even the flavor.

In America, bars and restaurants typically serve beer in the all-purpose pint glass. This widely used 16 oz. vessel has a cylindrical shape that tapers slightly at its base. From a purely functional perspective, it gets the job done. In the more beer-savvy regions of Europe, though, there are differently shaped glasses for different beers.

One of the keys to savoring a beer is in the foamy “head” that forms on top when poured. While considered a nuisance to many beer drinkers, this foam filters the compounds that give beer its characteristic aroma and, with the right glass, presents them in a way that is pleasing to the eyes and the nose. Since smell plays a major role in how humans perceive flavor, a glass shaped to retain a frothy, aromatic head truly adds to the experience.

So, what glass goes with what beer?

Pilsners, Stouts, IPAs, Lagers, Ales, Weizen… the list goes on. With so many different types of beer, how do you know which glass or mug pairs best with which beer? Allow us to be your guide.

Back to the beginnings: Stoneware Steins 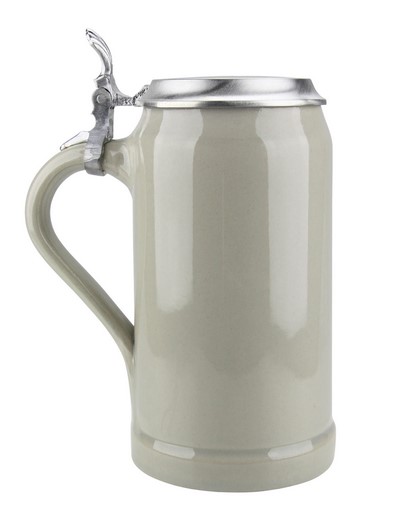 While the first beer steins were tankards cobbled together from wood, stoneware steins were the next step in mankind’s beer drinking evolution. The word “stein,” in fact, is short for “steinzeugkrug,” the German word for a stoneware jug.

Stoneware steins were originally created to help beer stay cold longer. The decorative pewter lid you see on many steins is a holdover from the 14th century, when the Black Death swept across Europe. Lids were added to keep diseased flies from getting in one’s beer.

Today, stoneware steins still do an admirable job of keeping beer cold, while also evoking a nostalgic vibe. If stoneware seems too primitive, consider a hand-blown and hand-cut crystal beer stein, or a hand-painted porcelain stein. 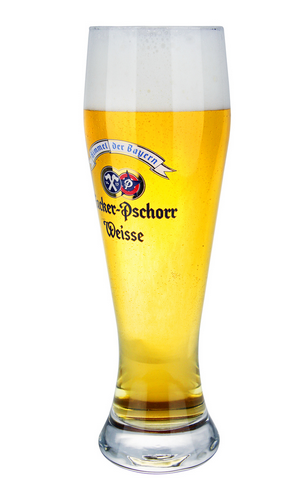 Wheat beer glasses have a narrow base to allow the naturally occurring sediment in weizen (German for “wheat”) beers to collect at the bottom of the glass so the taste of the beer isn’t affected. There is an outward bulge in the upper third of the glass to accommodate the frothy head characteristic of wheat beer, and a slightly inward arc at the top to help keep it in the glass. This allows the aroma of the head to be savored with every sip.

Most suitable for: Wheat ales (American version of wheat beer in pale and dark variants), Weiss beer (“white beer” made with at least 50% wheat to barley malt), Weizenbocks (strong, dark wheat beers), Kristaleweizen (“crystal wheat” beer that has been filtered to remove the yeast and protein haze typical of wheat bears), Hefeweizen (traditional Bavarian beer that substitutes malted wheat for much of the malted barley commonly used in brewing wheat beers) 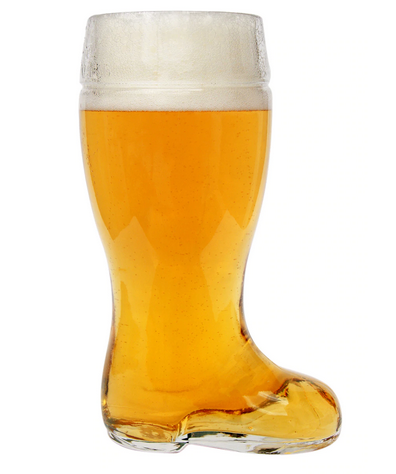 It’s not known who came up with the twisted idea for a beer glass shaped like a boot, but there’s speculation it evolved from a medieval hazing or initiation ritual of having someone drink beer from their smelly old boot. The traditional size for a beer boot is 2 liters, but you can also find beer boots in shot glass size, half-liter, and one-liter sizes at GermanSteins.com.

Drinking from a beer boot requires a bit of technique to avoid spilling beer all over your shirt. We recommend starting with the toe pointed skyward, then gradually rotating the boot sideways and proceeding cautiously. This will prevent the bubble that forms in the foot area from launching a tidal wave of beer in your face when it pops out of the foot section of the boot.

Most suitable for: Any beer that doesn’t produce a large head of foam when poured 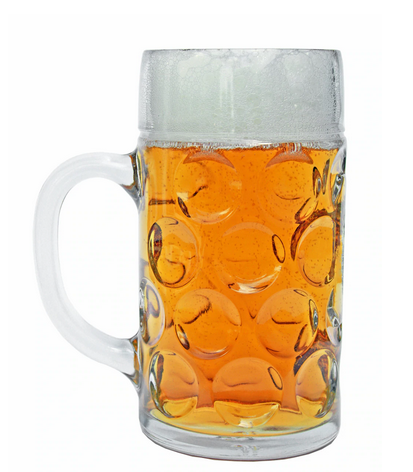 The classic Oktoberfest mug (“glaskrug” for you Germanophiles) is a thick, dimpled glass mug well suited to the rigors of this annual celebration. The dimples make it easier to hold onto when the world gets a little wobbly, and the thick glass helps it survive the inevitable drops that come with such an exuberant intake of beer.

Oktoberfest mugs aren’t picky about the type of beer you put in them. They’ll work well with any beer that doesn’t foam a lot when poured. They come in half-liter and one-liter sizes, many of which feature engraved images of German cities and the coat of arms from regions renowned for their breweries. Plain mugs can be custom laser engraved with artwork you provide, or personalized with a name or initials.

Most suitable for: A wide variety of beers, though preferably German. 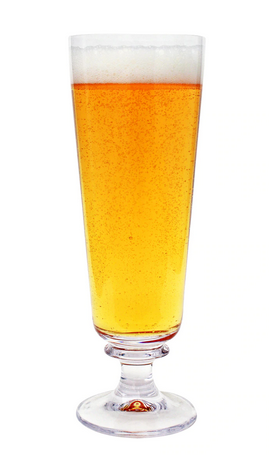 Though intended for its namesake, the Pilsner glass is a perfectly serviceable option for many types of light beers. Smaller than a pint glass, Pilsner glasses are tall and slender with a distinctive taper to a short stem at their base. They’re designed to showcase the color and carbonation of the pilsner style, while maintaining its head for both visual and olfactory appeal.

Most suitable for: Pilsner beers, pale lagers, other light beers 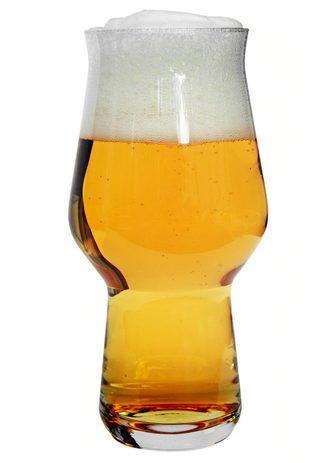 With so many craft beers being brewed today, it’s no surprise beer nerds have developed glasses to maximize the craft beer drinking experience. Perfect example: the Rastal Craft Master Two. This glass has a slightly tulip shaped upper bowl to concentrate the beer’s aroma, gracefully sloping sides to maintain the head, and a thin rim for a great feel on the mouth. There’s also the elegant TEKU glass, with a stem to prevent hand contact with the glass from warming the beer.

You can personalize your beer glass, or gift of a beer glass, with custom personalized engraving. We laser engrave names, initials, fraternity letters, company logos, and more in a range of fonts. 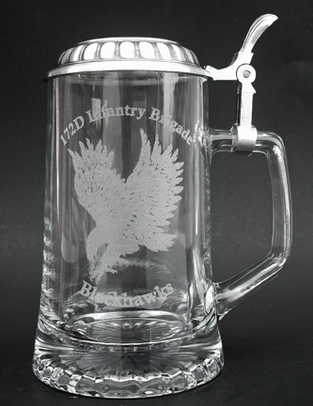 Custom engraving of logo and typography by GermanSteins.com

Because someone is bound to ask:

What size beer glass should I use?

What’s the best way to pour a beer?

Glad you asked! The recommend pour technique is to angle the glass at a 45-degree angle and pour until the glass is halfway full, then tilt it upright and finish pouring. This will yield a head of about ½ inch to 1 ½” of foam, depending on the beer.

Is it OK to ice a beer glass?

Serving beer in a frosty mug might sound like a good idea, but it’s not. The cold actually diminishes a beer’s flavor and the aroma from the foam.

Can you put a beer glass in the dishwasher?

Yes, you can. Should you? Absolutely not! Dishwasher detergents and spot removers can leave a residue on the glass that will affect the taste of your beer and its aroma. It can also compromise decorative elements gold plating or screen printed designs.

Are there plastic beer glasses?

Actually, yes. While considered déclassé by any dedicated beer connoisseur, a plastic vessel is a tolerable compromise for situations where breakage is a concern.